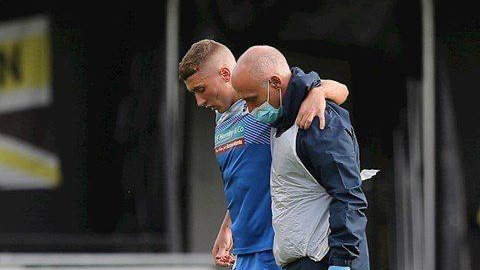 IPRS Mediquipe are delighted to announce that Dave Fevre has joined our team as our Clinical Support Lead.

He has consultancy roles with several European, Premiership, WSL, Championship and EFL football clubs and is on the teaching faculty for both the Football Association (FA) and Rugby Football League (RFL).

He worked in the NHS immediately after gaining his Chartered status and then within several sports injury clinics based in the private hospital sector prior to these full-time posts in elite sport.

He lectures internationally and in the UK on subjects related to sports injury rehabilitation, has had articles/research papers published in several rehabilitation related journals and is the author of the book ‘Collision Sports Injury and Repair.’

In 2012, he was invited to the European (London) and World (Belgium) Soccer conferences to present oral abstracts on his research work in professional football. He is also an honorary lecturer at both Salford and Manchester University and was awarded the ‘Outstanding Contribution to Professional Football’ award in 2014 by the Football Medical Association (FMA) and ‘The Fabrice Mouamba Outstanding Contribution to Professional Football Award in the NW of England’ in 2015.

IPRS Mediquipe are delighted to have Dave on board with Senior Client Relationship Manager Jude Potter saying, “We are delighted to welcome Dave on board in his new capacity. IPRS Mediquipe have been privileged over the years to be able draw on Dave’s wealth of clinical knowledge in a truly relatable and enthusiastic manner with an aim of challenging and inspiring our customers who have invested in Biodex equipment.”

Dave added, “I have been working in professional sport for over 30 years now and use of the isokinetic dynamometer (IKD) has been an integral part of my screening, testing and rehabilitation processes in the many injured athletes I have been fortunate to work with. Fortunately my role in injury diagnosis and rehabilitation has given me ample opportunity and time to take the use of the isokinetic unit well beyond the text of the accompanying instruction manual, and apply its use in a more functional sports-related way. I have been so fortunate to work with IPRS and Biodex in this time on a clinical basis that this new role just feels like a natural progression. It’s not just about the hardware; the relative staff teams from both companies have always excelled in ensuring that the IKD is available 365 days a year, a key component in rehabilitation within professional sport”.